Not a "race" report, but it sure felt like a RACE! VOGP

Two weekends ago, Kurt, Tread and I traveled to VT to participate in Vermont Overland GP.  We dragged Fred Prescott (pbm athlete hot shot) to suffer on the steep dirt climbs and ever steeper dirt descents.


I won't bore you with the small details, just the high (low) lights-


-Neutral start for about 1-2k, then- BAM!  straight uphill on loose dirt/gravel.  Awesome. 500+ guys and gals with fresh legs all smashing it hard.  No categories or age groups, just a good old fashioned race.


-Tread off the front with all the heavy hitters racing for glory, me and Fred a little further back but moving up.  Kurt slightly further back from us, riding steady.


-Fred super strong today, stretching out our group on every climb, dancing on the pedals with a huge smile on his face.


-Make it to the first water/feed zone and stop for a coke/water/treats.  Basically the whole group stopped so we didn't really lose many spots.  But who cares because it's not a race, right?  My heart rate was 176 avg for the first hour.


-Still in same group riding strong, Fred still on the front breathing through his nose.  Tread, long gone never to be seen again. I flat (thank God) and pull the plug on my "race".  I change the flat at a very leisurely pace hoping Kurt or another friendly race will roll up.  Kurt finally arrives and we chat, then set off to finish this thing.


-I stay with Kurt for a little while then decide to get a little extra tempo work in and ride away.  Not an attack or anything because me and Kurt are tight and I would never attack him like that, just a subtle acceleration which he could have followed but didn't.


-I finish 3:42 (I think), stopped a lot to eat/drink/nature calls/flats, so I think it's respectable but no where near Tread or Fred.  Both those guys drilled it.  Can't say I'm not jealous, I would've like to have tested myself to stay with the front groups.  All told, I got in 6+ hrs of riding, with over 7k vertical feet.  Good times.  Of course, Tread and I had to ride to and from race venue for warm up and cool down.


Thanks for reading.
Bill.
Posted by Unknown at 2:14 PM No comments:

Race reports...everybody is doing it!

Why write a race report?

You’ve spent weeks and months working hard to get race ready. Race day comes and goes. Hopefully the result is great, but sometimes it's not. What was good and what was bad? Put it to paper (virtual paper these days!)

Athletes have horrible short-term memory I have found. They forget details of races and past training as they are busy with normal daily “life” events.

This is why after any “A” priority race report is important.

First off accountability. Its part of being a good athlete. You are accountable to a training log and a coach, so a race report is just the next level after an important race.

How about motivation?  Regardless of a good race or a not so great day…looking back at the write up will get you back to work and looking to improve on what went GREAT!...or what went not so good.

A good story! Other athletes love to hear “war stories” so if you like, sharing your race report with friends, confidants, coaches, etc can be a fun way to bring them into the world of a tough fought event.

Lastly a sense of closure. As athletes….we race. That simple. If the race went well we get back to work and try to get better. If it flopped, we learn from it. Get back to work. And get BETTER.

So while you are recovering from your next “big race” take 10-15min and write up a brief overview of how it all went. Save it. Send it to friends. Send it to your coach…heck, send it to me. I am a sucker for those things.


@pbmcoaching
www.pbmocoaching.com
Posted by Kurt Perham at 6:25 PM No comments:

One of my pet peeves as a coach is when an athletes bike session is cut short by a simple mechanical. After riding and racing competitively since the late 80s, I have dialed in my EDC (everyday carry) for the road bike to a proven collection of items that I do not leave home without. Let me know what YOU like to have to avoid the "call of shame" (calling for a ride home due to a simple bike issue)

-Frame mounted pump. I tell my folks; co2s are for racing, pumps are for training. And/Or "pumps save training sessions". I have heard of NUMEROUS comprimised sessions as the "1 and done" CO2 failed and the athlete was left stranded. I like this Specialized version in the pic, but many to chose from. I like it mounted to a water bottle boss so you don't have to remember it. Also, make sure its not MICRO in size and can fill a tire to 80+ psi in a moderate amount of strokes.

-Basic seat mounted pack. Not much to write here. Just big enough to fit what I need. Secures with velcro or a snap type mount. Many options out there. Bring what you want to pack in it and find the right size for you.

-2 tubes! See above re: single use CO2, this also goes for a tube. You DID remember to check the tire for the glass or nail...right? If not, that second tube will get you home. Make sure the valve stem is long enough for your training wheel depth.

-Tire levers. Certain tire and rims combos are tight. I like these Lezyne alloy levers. They are small and will not break!

-Master link. Modern chains are very strong and breaking one is a rare occurrence, but with a simple "master link" you can remove the chain at the link and just snap it back together with this link. (see multitool below)

-the pouch. Last but not least I always carry my PBMCoaching phone pouch. This is a waterproof pouch that holds : 3 dollars for that mid-ride bonk, and a multi-tool (this one is a crank brothers). The multitool has every hex size on the bike, a T25 torx and a chain breaker. I can literally build a bike with this tool if needed. Last in the pouch is my Lazer helmets cappuccino lock. The device turns your helmet strap into a lock for a post ride Latte stop!

There you have it. My basic road EDC set up. For the mountain bike I had 1-2 things (derailleur hanger, suspension pump) but otherwise everything else stays the same.

So please, no more e-mails to your coach saying you had to cut a ride short, make sure you have your EDC squared away before hand. 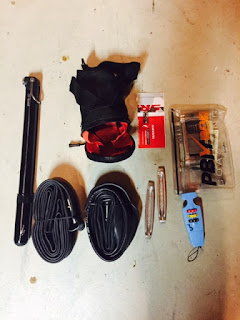 Posted by Kurt Perham at 4:34 PM No comments:

Embracing Injury: Yes, You Can!

Last weekend, about two hours into a trail clearing frenzy using a swing blade, I misfired and swung the blade directly into the inside of my left ankle. The skin split right open and the pain was intense. Three stitches later my ankle swelled to the size of a grapefruit and I could not step down on my foot.   Is it strange that what immediately goes through my head is, ok, what can I do with this? Maybe, but also essential to keeping my goals where they are and doing my best to achieve them.

Getting hurt is no fun. Injuries come in all kinds of ways, from dumb landscaping mishaps, to overuse, to incorrect movements, to bad shoes.

Prevention is key, but what to do if you find yourself in the unlucky position of a game stopping injury?

1. Get professional attention. It is faster to schedule a quick visit to a PT or a doctor for confirmation than to try continuing to train, which may be extending or worsening the problem.

2. Be creative. Once you’ve determined the issue, figure out what you CAN do while it is healing. Work AROUND the injury. I am a specialist in this department. After breaking an arm in a snowboarding accident, my very understanding physician cut ‘sweat holes’ in my cast so the moisture could drip out while I was killing it on the trainer. Don’t take ‘do nothing’ as an answer. You can almost always do something!

3. Be badass. If you have a foot injury that means you can’t run, you may be able to win the spin class down the street, become super flexible with a rock hard core in yoga class, or step up a lane in masters swim group.

4. Think positive!  Every injury is an OPPORTUNITY! That’s right people! An injury means change. Change can be good. Become better while you are injured. Say to yourself, what am I going to get out of this injury? I’m going to get stronger.

5. Adapt. OK, sometimes with all of the work and creativity and strength you still can’t toe the line at your event. It’s a drag, but it happens. Move on! There are more races. Get on Google and start searching! Reconfigure your calendar and know that you’ll get there.

6. Enlist help. A good coach can help you through this time period. They are often masters of developing different pathways for athletes. No coach? Tap your friends. Join a group that is doing things you can do too. Adjust your world.